Why do Guinea Pigs poop so much? Is it normal? 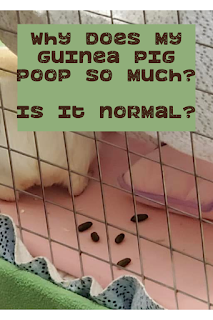 I've often had people ask me why their guinea pig poops so much.  Why do they poop so much?  How do you keep them from pooping everywhere?  Is it normal for a guinea pig to poop this much?

Well, I have a short answer for you.  Yes.

Guinea pigs are prey animals and thus they are prone to leaving "beans" everywhere.  When they are picked up, their automatic thought is worry even if they love you.  I mean, you're a human, an ape sized creature and you are picking them up.  It has to be a little frightening.  So let the beaning start!

I had one pig that it was uncomfortable for him to go to the bathroom and he would sit on me and look at me and leave a pile in my lap as if I was helping him do something difficult.

With another pig I had, my mother and I had a blanket on the couch and we were on each end.  He was having a regular poop fest, and my mother was picking up the beans, and the little guy didn't want me to be left out, so he ran into my hand and left one there!

Guinea pigs do eat their beans as they contain nutrients, so I think that's what the little fellow was thinking was going on when my mother whisked them away so promptly.

There's really no way to keep them from going to the bathroom everywhere.  You can collect their beans and use it as fertilizer.  The best way to do this is to use a blanket when you hold a guinea pig and collect the beans in that.

If you're a true guinea pig person, you'll find beans everywhere.  I was in Europe one time and found one from my pig in my suitcase.  *sigh*. You'll find them in your shoe, in your bra, in your pockets, in your car, in your purse.  It's like they enjoy kicking them out of their cage to be found elsewhere!

So, yes, it's normal for a guinea pig to poop A LOT, and there's not much you can do to keep them from pooping everywhere except hold them in a blanket.

Posted by Jennifer Wilson at 7:34 PM No comments:

Why do Guinea Pigs Chirp? What does it mean? 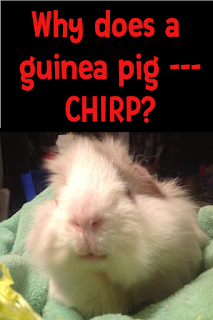 A chirping or singing guinea pig is a rare thing, I've had guinea pigs for 24 years of my life and I have only heard it a few times.  It sounds like there is a bird in their cage.  Really!

It happens rarely enough that there is no general consensus on what it means.

Not liking something that is happening.  (My one guinea pig would usually chirp when I would doze off in the living room and start snoring.  He didn't like my snoring.)

Mourning.   I have heard of guinea pigs chirping when their bonded companion dies.

The first time I heard it, I was startled, and my mother and I were convinced there was a robin in the house.  Instead it was our little Caesar making the noise.  I suspect he did it because he heard my mother and me talking in another room, and he adored my mom and he probably didn't want to be left out of the fun of being with his human.  :)  While it is only speculation, he seemed overjoyed when he got cuddles from her.

One of the best things to do for loneliness besides getting a companion is I spread a blanket on the floor and then put a guinea pig playpen on it.  (Just make sure none of your other pets can get to the guinea pigs!)  Then I fill it with a few cardboard boxes, paper bags, and my guinea pig adores running through his crinkle tunnel.

You can listen to my guinea pig chirping on this video:

Email ThisBlogThis!Share to TwitterShare to FacebookShare to Pinterest
Labels: sounds

25 Gift Ideas for Guinea Pigs and Their Human Owners 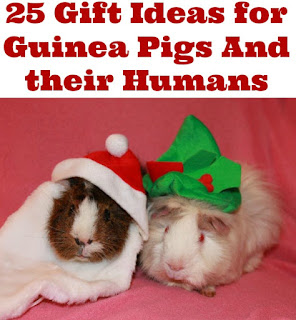 
People have loved getting gifts for my guinea pigs over the years.  Unfortunately, not all of the items marketed for guinea pigs are healthy or safe.  Please don't get balls they can run around in -- those aren't for guinea pigs because it could hurt their backs.  Most store bought treats either have seeds (which I have had to extract from teeth and have gotten bit) or are high in sugar.   Here are some things that guinea pigs and their owners would actually like and appreciate. 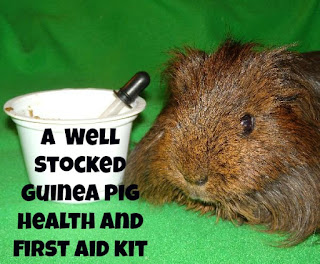 This post contains affiliate links.  I am not responsible for the outcome of using this advice, it is things that have worked for me, so use at your own risk.

This is a list of items I keep on hand at all times.  Some aren't really first aid items, but health and grooming, but these are all things I believe guinea pig owners should have in their cupboards!  Guinea pigs don't show they are ill until they are very sick, and having the first aid items at home can prevent a midnight run to the store -- and hopefully bring relief to your little one.  This is NOT to replace going to the vet, many times you will need to go to the vet for antibiotics, but this is to help see you through until you can get to the vet -- or to supplement what the vet is doing. 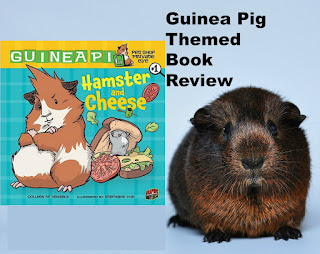 Hamster and Cheese (Guinea Pig, Pet Shop Private Eye)  is a 46 page comic / graphic novel for kids featuring a guinea pig named Sasspants.  He lives in a pet shop, and the "G" on his sign of "Guinea Pig" fell off, so a hamster named Hamisher thinks Sasspants is a private investigator.  There is a mystery a foot -- daily Mr. Venezi, the owner of the shop, sets his sandwich down, and before lunch it is gone.

Read more »
Posted by Jennifer Wilson at 7:06 PM No comments:

Promote Your Page Too